This piano was moved out of a house in Salisbury, where it was played sporadically. Now being in The Captain’s Table restaurant and being played about 4 hours per night by Phil Perdue, the piano started exhibiting an interesting problem. After about 2 hours of playing, certain keys would just stop working. The next day/night the problem would be gone, only to return after about 2 hours of playing. I returned to The Captain’s Table and replaced the center(hinge) pins in the jack of the 2 keys most effected. This solved the problem for those notes, but more keys started to show the same issue. It was finally decided, that I would replace the center pins in the middle 4 octaves of the piano, so this past Friday I returned to do that. Below are pics of the action pulled out of the piano, removal of the top stack, and a couple of pics of the whippen, one with the jack removed.

So far, the repairs seem to have worked…. 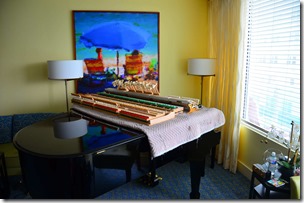 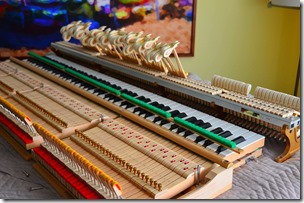